How to Quilt in the Hardware store...

Now I love a hardware store as much as the next girl but when you're there with your husband and your eyes start to glaze over, what do you do?
Well you head off to the paint swatch section of course. Pick out colours that you think match your fabric. Then you take them home, cut them up and play with them! 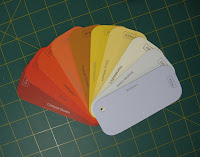 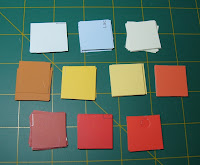 
Oh yeah, oops, even though I haven't shown you yet, these are the colours for my DSQ. I did buy a little bit more fabric but I'm really happy with all the solid colours together. I'm saving this quilt to do after Christmas but in the meantime it's so easy to play with the paint swatches.


Time to stop playing though, I've been feeling completely unmotivated this week and I need to get back to work.... 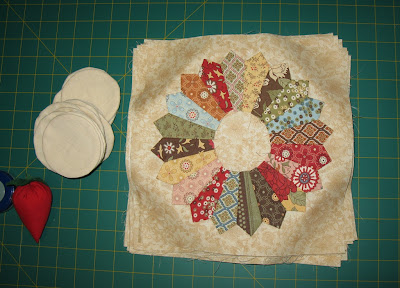 Apparently Dresden's do not make themselves.  Bugger.
Posted by Hitch and Thread at 2:00 PM 5 comments:

For those of you browsing around in blogland lately you might have seen a little thing hosted by Amy that is the Bloggers' Quilt Festival.  Ok, ok, it's not little, its HUGE! and its wonderful.  It's like going to a great quilt show but without the crowds or the sore feet. Oh and there is no line up at the coffee stand either! Last year I had a great time seeing all the wonderful quilts and this year I'd like to share one of mine.


NB: Some ninny got the date wrong when the Festival closed, so now I'm just sharing not linking :(

I finished this quilt earlier this year, before I started this blog. Its a small quilt 23.5" x 27.5" designed to fit my Goddaughters doll crib.(Sorry about the bad photos, I took the photos on a very cloudy day) This was the third quilt I'd ever made and it was a gift for Christmas 2010 however I only finished and posted it to her at the end of February 2011, that still counts as Christmas right?

This shows the lovely quilting that by the very lovely Faye did for me over the Christmas holidays.


I also made a little matching pillowcase to got with it. I tried to match the front and the back of the quilt and the pillow so she could reverse them if she chose.

Lastly I put a sweet little label on the back. The quilt pattern was a free pattern from the Marcus Fabrics website. I like to think its both modern and timeless(just humour me ok :) ).  All the fabric except the pink sparkly fabric was from my stash.  The floral print on the back is more like a voile so when Faye quilted it she put a lining fabric underneath and it worked really well.

I loved making it and it was hard to let go of but I'm told she loved it and she and her doll slept with it that night. So totally worth it!

I'm going to the Craft and Quilt Fair today(wish my feet luck!) but the Bloggers' Quilt Festival is also a great way to spend a Sew-Inspiration Sunday!
Posted by Hitch and Thread at 10:30 AM 5 comments:

Fake it or Make it?

What do you really think about appliqué? Not the design as such but how it's actually done. I don't know about you but I've always had a thing that appliqué, especially on a quilt, needs to be done by hand and be invisible. Any other kind was faking it. I guess it really stems from the fact my Mum used to teach and judge handicrafts and we would always hear her comments about items that were poorly finished, seams not pressed and hand sewing that was visible. All those comments seem to have embedded themselves into my brain and so I've always hand sewn(very carefully!) any appliqué I've done. (TH has mentioned I might be a teeny tiny bit pedantic about it but really, who are you going to believe ;)

But having said that, the first Dresden I appliquéd took me over an hour to finish. Yes, I did have some little interruptions, still that meant even if I could do three a day, it would take me ten days. Two a day, fifteen days.  So I had a rethink and a google and then a play on my machine to test out some machine appliqué. I decided to go with a blind hem stitch and just do one and compare, cause you know, I can always unpick! Or frog it? Is that the right term? You know where you rip it, rip it, rip it!

I'm really happy with the result.  It took me longer to figure out that I was trying to put the blind hem foot on back to front (It actually took me a fair while to realise this and then I didn't use it anyway) and to stop giggling than it did to do one plate.  The thread is one that Faye has given me(Thank you!) and it blends in really well on all the colours and I'm very happy with the results.

Have a look at them side by side. The one on the left is by machine and the right hand one is done by hand. From about 15cm away(less with my eyesight!) you can't tell the difference!


I've also used it to put the centres on. They take no time at all compared to all the stopping, starting, turning for the Dresden's.

So even though I feel like I'm faking my appliqué, doing it this way means I'll get to actually finish this quilt in time this decade. So I guess my answer is I have to fake it to make it!


I did have a couple of other questions though:

Why do I only do wobbly sewing on the parts where it will show?
Why don't sewing machines come with a foot lever for the presser foot, instead of that stupid knee thing?
Why can you only find the pins you've dropped by stepping on them?


If anyone knows the answers please let me know!
Posted by Hitch and Thread at 10:50 PM 4 comments: