I've been working on my secret squirrel quilt today.  It's for a friend of mine so I can't say too much here, as I'm not sure if she reads my blog but I'm really hoping she will like it, 'cause ya know, every girl needs a quilt!

Now I found this Plates For Your Table Tutorial at the Moda bake shop, it has four parts but the one I'm basing this quilt on is the Dresden plate table runner. 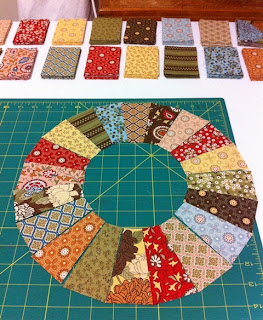 So to have a break from cutting out all the wedges, my least favourite part, I thought I'd make one Dresden to see if I needed to adjust my seam allowance. While I'm trying to follow the pattern, I am varying it slightly by also adding a couple of little backstitches where the point of each wedge will be, for some extra security.  Ive also been making friends with the quarter inch foot Ella come with.  I have tried it before and wasn't impressed but this morning its been going pretty well. 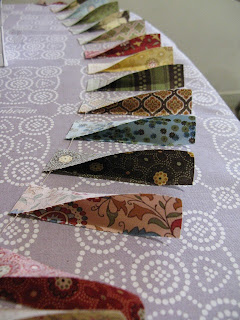 After a little while I ended up with this. I was pretty happy with it, until.... 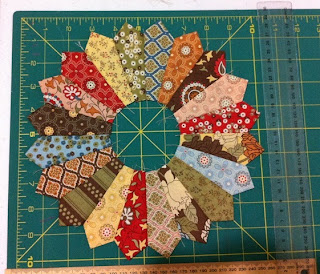 I measured it :(  According to the pattern its meant to finish up at 8 3/4". Mine, as you can see above, is almost 10", as big as the square its meant to go on.
SO, I had a re-read of the pattern and yes, I had cut my rectangles slightly wider than required. That didn't matter. Then I realised that the ruler I'm using to cut my wedges, the Easy Dresden by Darlene Zimmerman-

might be different that the one stated in the instructions. So I had a quick look and sure enough it is.  Darn it.  I then hunted (for a fair while, since small people don't tend to file like I do) for the instructions that came with the ruler.  Once I found them I saw that my ruler suggested a half inch shorter wedge.  Aaaargh, more cutting.... 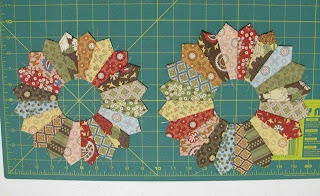 But WOW! What a difference. The right size wedge, a slightly bigger seam allowance and it went together beautifully. Only 23 more to go... 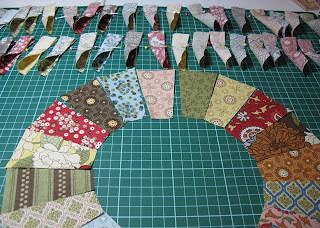 For those who are wondering, I have used the same fabric as in the  moda tutorial.  I thought she'd like it and its got a nice variety of colours rather than just three or four. But remember if you know who its for, Secret Squirrel!

I know, I know. Two posts in one day but since my blogging this month hasn't gone to plan, I thought what the heck...

I found this gorgeous little quilt through Modern Day Quilts.  This great site showcases one modern quilt a day and on Thursday had "The Little Prince Quilt" by Diana from sticks and bubbles.

I love the colours, the fabric used, that gorgeous, floppy ear which flips over to show a sweet appliqued letter underneath.  The simple quilting is perfect.  I'd love to make one. I just need a reason, oh, and time!
Posted by Hitch and Thread at 10:04 PM No comments:

Happy Birthday My little Superhero - UP UP and AWAY!

What does a going-to-be-Three year old need for his birthday? A Superhero Cape of course! I based the idea on this superhero cape tutorial I found ages ago. As you know from this ballerina bag I find it hard to follow someone else's design, so I used some newspaper to make my own cape pattern.  In between about 150 games of hide and seek I managed to do a little sneaky measuring without too many questions.


Big brother had helped pick out a colour (a VERY bright green that the camera does not do justice to) so after cutting it out, I then designed some simple superhero-ish applique.  Naptimes this week have been filled with some secret sewing and I finished it off the other night. 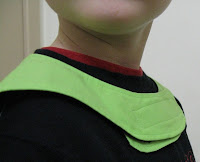 Of course every superhero needs a mask to hide his identity so with some help again from big brother, I made a template and used two different colours of Eva craft foam, to match both sides of the cape. 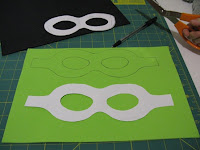 I used a fairly close satin stitch to go around the edges. One colour stretched a lot and the whole thing needed a retrim which was pretty awkward, especially around the eyes. I still didn't like the way it looked so I ended up using a sharpie to colour the outside edge and around the eye holes. Voila! Now you will never know who he really is. . . .

Then for Big brother who was an excellent secret keeper I made one too. 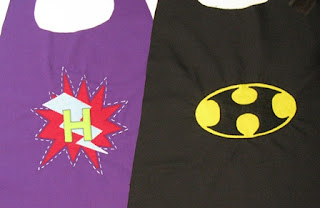 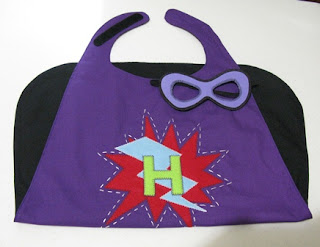 There was another beautiful day here last week. Perfect sunshine, lovely fabric(Simple Abundance by Bonnie and Camille for Moda), 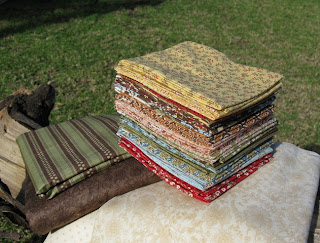 and some time to cut it up uninterrupted! 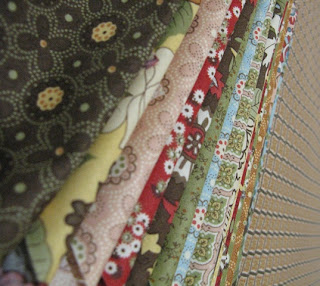 I have a plan for this fabric, I just can't reveal it yet!! 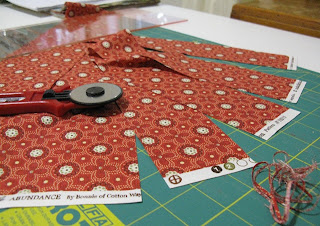 I cut up 20 Fat Quarters and there was only that tiny pile of threads down at the bottom left from each one. Well, aside from the one where I made one teeny tiny mistake.....
Posted by Hitch and Thread at 1:14 PM No comments: